One of those automatic calculating money boxes – ideal for sadqa throughout the year – the kids (erm…and adults!) will love putting coins in and reading the total

It came with chocolate coins to start off with – so was a yummy present too!

In Their Name - Sadaqah on behalf of departed loved ones

I just LOVE this ad. And the message. But it made me teary 🙁

In Their Name is a new website that provides you with the ability to come together with your family and give sadaqah on behalf of your departed loved one.

Laylatul Qadr 6: Give sadqa in 3 different parts of the night

Give out sadqa at the 3 different parts of the nights of Qadr (last 10 odd nights plus the 24th night):

Having read this in a summary of lecture notes by Zakira Tahera Jaffer, I asked the kids to make 3 different envelopes each (with paper and sellotape as I didn’t have any small money envelopes at home!).

They then labelled them accordingly. We actually didn’t manage to give the sadqa yesterday as we were at mosque for the first and second part, but they got the concept at least, and Inshallah we will try to make it work tomorrow night!

Friday is dedicated to Imam Mahdi (aj), and he will reappear on a Friday also.

Below are some ideas to make this day stand for our children so that they truly come to think of it as an Eid, and associate this happy day with the Imam 🙂

Check out what one mum did! She created a Jummah box with all the things they should be doing on that day as a reminder for the family 🙂 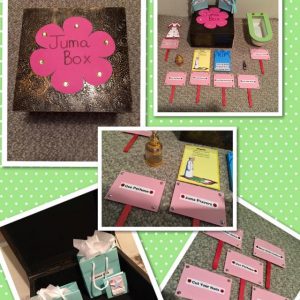 Have an awesome day, Inshallah 🙂