Last week, we got together and got our paints and brushes out!

Here is the Powerpoint used.

We began with a question – what would you do if?…

If a friend took your phone?
Then you try and take it back and she kicks you?
And goes to the teacher to tell on you.
What if the teacher then puts you in detention?
Or expels you?
You go to court but you keep getting told you’re the one whose fault it is?

HOW DO YOU FEEL?

Most rightly said they would feel hopeless and couldn’t understand how such a gross injustice could take place, and were shocked when we explained that unfortunately such injustices do happen – for example in Palestine.

They then brainstormed ways they could act against this injustice in a peaceful way – such as protests, petitions, use of stories, media and ART.

We then introduced different art works that people have used to spread awareness of injustices of things like Palestine, but also Syria and the refugee crisis, the current event of Marzieh Hashemi and even hijab.

We reiterated the aim of using our voice through art to make a peaceful stance against injustice, using Imam Hussain’s words: ‘I only desire to spread good values and prevent evil’.

The children then brainstormed issues that were close to their heart, then chose one and brainstormed further on ideas of what to draw/paint on that topic. They then drafted it out and went on to do it on canvas. We were very impressed with their thinking and the wide range of art they produced.

We had a fantastic rock painting session last week for the 5-9 yr olds. The first rock was the rock of good habits. The children discussed and thought of a good habit they wanted to instil in their life. This was then painted on to their rock with the number 40. Reminding them that it takes 40 days for an action to become a habit. They would then keep this rock in a place they would see everyday as a reminder to make that habit a rock in their life.

The second rock had a little twist. We painted and decorated this rock with the words #mymosquerocks #hujjat after the rocks had been varnished and dried the children got to hide them outside around our centre. The idea that when you come to the centre you bring a rock to hide, maybe you’ll find a rock which you can keep or re-hide for someone else. Building a connection with our centre.

This Art Set for youngsters was made extra special with a special note that said:

Inshallah I pray that your life has been drawn out well this Ramadhan and Laylatul Qadr… and that you keep drawing with this set too!

Here’s this week’s Friday inspiration! Plus another great role model for our children 🙂

In case you haven’t seen this…a Christian artist makes sculptures of the 99 Names of Allah! May be of interest to budding artists in the family 🙂

For those of you who are planning to do worksheets and art activities with your children at home, or Ramadan class teachers who are looking for a way to organise all the children’s work, here is an idea that might help!

Simply fold over a large piece of sugar paper (the size of paper depends on what your needs are), staple the sides and get the children to decorate the front! Add moons, stars, stickers, glitter – basically get the creativity flowing and make something practical at the same time 🙂

Or how about this idea about making a scrapbook? I have been fretting in the last few week because I can’t seem to find a good Ramadhan Journal for my kids – one that has all the things that I want it to have, and doesn’t have the things that I don’t think (from past experience) will be useful for them.

And then I saw this! It’s perfect! I can help them incorporate exactly what is right for them into it, and it will Inshallah be a perfect place to stick their work/crafts into – and thus become a perfect keepsake for this year’s special month.

Inshallah if we keep this up every year, they will have a whole bunch of scrapbooks to show their development as they go into adulthood! I only wish I’d come across this idea a few years ago 🙂 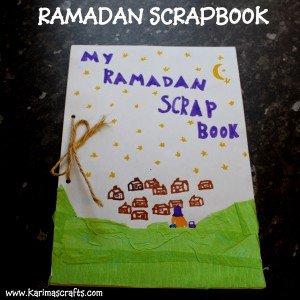 Idea No 3: Encourage the expression of grief, love and understanding of Karbala through different forms of Art – then hold an exhibition! (Sent in by Sumayya Pirbhai)

The impact of pictures and images on any child is usually greater than any form of words will be. Having noted this in our workshop sessions, we presented the idea of an art exhibition to the community to submit works that related to our theme: “Revolution of Kerbala through Art”.

A mass invite was sent to the community and many members were contacted directly to encourage maximum participation. Participants were given guidelines and were required to submit an artist statement which explained their art and answered the question “How does this relate today?” After all the submissions were received, each work and statement was on display for a few days leading up to Ashura.

Many children invited their friends to “come and see this one” whilst adults were overheard drawing their own conclusions from the works on display.

'How to Encourage Drawing Skills, Confidence, & Creativity in Young Children'

Check out this really cool site on ‘How to Encourage Drawing Skills, Confidence, & Creativity in Young Children’. Combine this with the crafty blogs posted earlier, and voila!