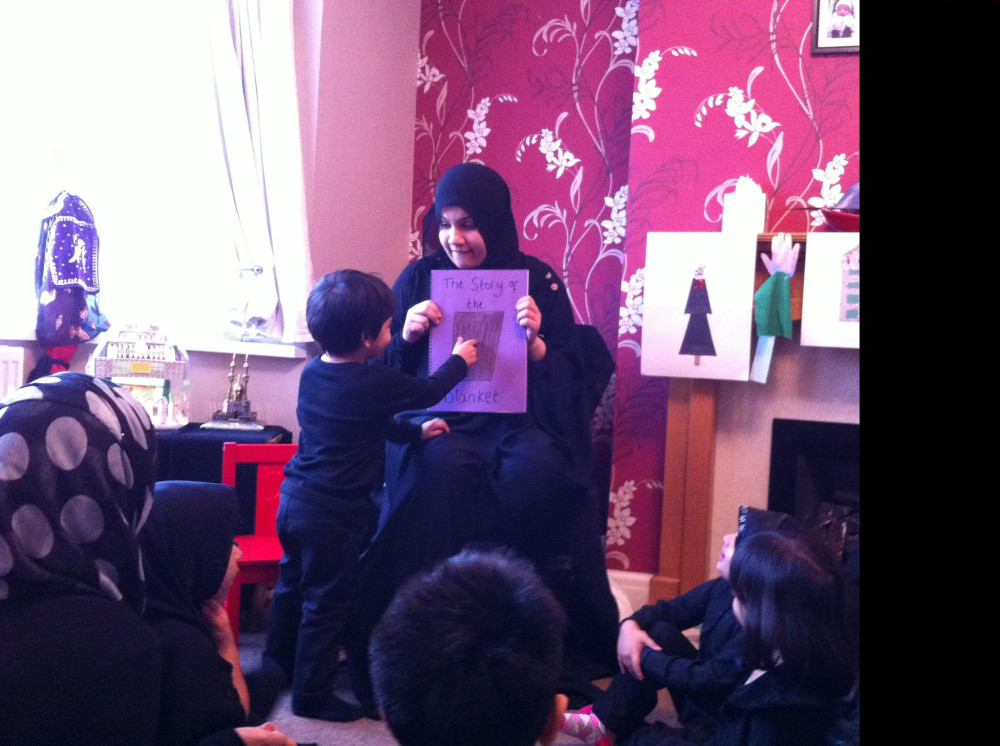 And so we begin, Inshallah…

Subhanallah, during the last month and a bit, we have had so many wonderful opportunities to commemorate the event of Kerbala. During the first ten nights, we shared ideazz on how to do this in our homes and with our families. We will now focus on how we can do this with the community around us, while still involving the children also.

Being a mum of three young children (aged 2, 3 and 4) I have always felt that their age group is missed out on in terms of Muharram education. Although the two youngest attend our community nursery, they are exposed to Muharram based activities and education but only whilst at nursery. Once we take them to mosque then they just follow us like sheep and are kept occupied during majlis. Although I actively explain each nights significance etc, I feel they have never experienced a majlis for their age group and decided to hold one.

We had about 20 children with ages ranging from 2 to 5 years. We tried to stick to the conventional majlis schedule by having Marthiya, Hadith-e-Kisaa, Majlis, Matam and finally Ziyareh. However, with a twist! The majlis needed to be based on the typical majlis but in a way that the children would benefit from.

We had a marthiya recited by a friends young son, Zahid Alidina. He was superb and has recently been reciting in the main program at our mosque.

We had Hadith-e-Kisaa as a story version. So our ‘Mulyani’, a dear friend Shellina Walji who is amazing at getting children’s attention put together a story book with pictures. Her 3 year old son can be seen in the photo’s helping to turn the pages. The story was excellent as it showed the Holy personalities depicted by a ‘shining moon’ under the blanket (as the verse goes “I then witnessed his face glowing like a full moon”). As each member of the Holy Family entered and went under the blanket another moon appeared on the next page. The story had many beneficial educational elements in addition to the story of Hadith-e-Kisaa. It encouraged counting (the children counted as each person entered the blanket), it showed nature scenes (the verses “I created..this Earth…moon..sun…planets..oceans…”) and of course children are very used to the story book format.

We then held a show and tell majlis. We had put up posters of common Muharram themes. An alam, a zarih, a mashk and also some of the art work the children had created at nursery. The ‘Mulyani’ then proceeded to ask and explain to the children what each element meant.

We had borrowed some alams and two zarih’s to keep at the majlis, another friend Ishrat Pirmohammed and the children then recited “Oh my Asger” and did matam. We then did Ziyareh.

The children were given Niyaz in takeout boxes of chips and chicken nuggets, a box of juice and also bags of fruit, dry fruits and a wafer bar. Mums had their own Fatiha bags.

After the whole thing was over I was left with a feeling of immense satisfaction. Our house was blessed with our dear friends and family’s presence, we mourned and remembered Imam Hussein (as) and his family, and best of all; all the children regardless of age did benefit in some way or another.

Obviously being our first childrens’ majlis, there were challenges, but none of them affected the children’s gain from it, but it did give me ideas on what I would change if I were to do it again Insha’Allah.

+ the timing, we had to keep it at 1215, so mothers could pray and come, and also that the mothers could attend ladies majlis at mosque in the morning. I would keep it earlier so that the very small children would not have been close to their nap times or snack/lunch times.

+ perhaps more items in the show and tell majlis.

Overall, I think it was a success, I felt the confidence to do it again and cannot thank our friends and family for all their help and especially to all those who took part so wonderfully and genuinely.

EDIT: Buzz Ideazz has since compiled a list of ideas for Children’s Majalises to help you hold your own! Check them out HERE.