Jummah Mubarak! Got sent this yesterday and it was perfect for today’s inspiration 🙂

“Why do you hate your beak? I think it’s beautiful,” his mother said reassuringly.

“All of the other birds have much cooler beaks. Sammy Spoonbill, Pammy Pelican, Harry Hawk, Freddy Finch, all of them!”

Peter’s mother sat silently for a moment. “He may be right,” she thought to herself, they do have very cool beaks.

So Peter Parrot flew to the tallest tree in the forest and found Major Macaw.

“Excuse me Major, I have a problem,” said Peter.

“Oh dear, what can it be?” asked the venerable macaw.

“I have a stupid beak. Why can’t I have a cool beak like Sammy Spoonbill, Pammy Pelican, Harry Hawk or Freddy Finch?”

“You’re right.” said the macaw, “They do have cool beaks. Tell me Peter, do you like eating worms and crustaceans?”

“Yuck! That would be disgusting!” responded Peter.

“Well, that’s what the spoonbill’s beak is designed for. What about fish?”

“I couldn’t think of anything worse,” said Peter.

“So, the pelican’s beak would work either.”

“What about rabbits and mice?”

“OK, so maybe you shouldn’t aspire to have a hawk’s beak. Small seeds?”

“They’re not so bad, but my favourite is Brazil nuts.” exclaimed Peter, salivating at the thought.

“That’s lucky, I think I have a few here. Would you like one?” asked Major.

“Tell me Peter, if you had the beak of a spoonbill, pelican, hawk or finch, do you think that you could eat that Brazil nut?”

“I guess not,” said Peter with his mouth full.

“You see, young parrot, you have been designed a certain way, with certain skills, attributes and tastes. Don’t waste your life being envious of the capacities of others, just make sure that you know what you’re good at and why you’re here.”
Peter nodded his head in understanding and flew back home much more content.

Moral of the story:-

You were designed for a specific purpose.

Don’t worry about the skills and attributes of others, they have their own purpose that probably won’t suit you. You have the ability to do remarkable things just as you are. Work on that purpose. Get better at those skills.

Trust the Lord and His design for it’s His purpose.

Click on the link for a WHOLE bunch of cool videos/rhymes/stories, etc.

You may have heard of Story Boxes – where boxes are converted into story telling opportunities with the right props and decor.

Here are some examples of Islamic Story Boxes sent in by a mum!

One to note for today in particular is the one on Imam Ali (as) – Khushali Mubarak to all of you, btw! There’s also one on Hadith-ul-Kisa, the narration of Thaqalayn at the Prophet’s death and the House of Grief of Bibi Fatima (as) after the Prophet died. 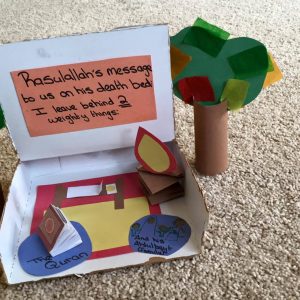 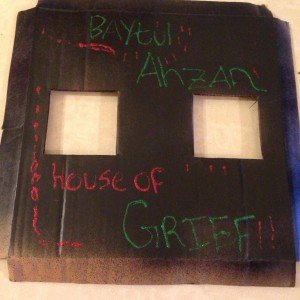 What a great way to convert plain boxes into valuable and fun teaching moments!

For slightly older children, and with slightly longer attention spans, the Ahlulbayt TV’s Children’s Hour is one to watch.

From what I can see, it started off as a little more child-based with puppets and pirates, but after 4 episodes it has moved more of a talk show style. There are still puppet shows, stories and poetry, quizzes and cartoons within…

They extensively cover Muharram, as well as Ramadhan and special occasions such as the birth of Imam Mahdi (aj).

Check it out through the links below:

This series focusses on the Names of Allah and is a great accompaniment to any lessons/crafts on the topic.

I know they have raised funds for Series 2 but it doesn’t look like it’s out yet…will keep you posted!