What does it mean to truly win?

How to raise your children, when you're dead

Scary, but important to know and do…

“Ali had two young children. While he was playing baseball one day, a ball hit his chest. A few days later, he was gone at the age of 33. Three years later, his widow, Firdaus, died in a car accident.  Someone else was now needed to raise their two children, but who would that be?

Many Muslim parents have no idea what would happen if they were to be put in the place of this hypothetical couple. Complete strangers or unsuitable family members being named guardians are so common that it is not worthy of making the news. You may already know that a busy legal system exists all over the United States to address this recurring problem.

If you are a Muslim, and hope that your child is raised Muslim if you are not around to do so yourself, judges will usually not go far out of their way to honor that hope unless it was followed by action on your part. This is not Islamophobia. Why should busy judges care if the parents evidently did not?  Naming a guardian for your minor child in a legal document is easier than changing diapers. You just need to make a few decisions.”

The Power of Dua!

Just WOW. The power of prayer 🙂

I had mentioned last week that there were some very cool ideas out there in terms of interactive ways of teaching.

Here is another one which I think is SUPER – I’m sure you’ve heard of Story Bags, well this is a Sura Bag!

Each Sura has it’s own bag, and within are little bits and bobs related to what the Sura is all about, the lessons within, and even the benefits of reciting it.

For an example, check out the different objects in the Suras pictured in more detail. You can write what it exactly is on the back to allow the children to explore and learn on their own, or choose to do it in circle time also! 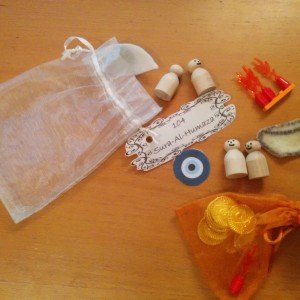 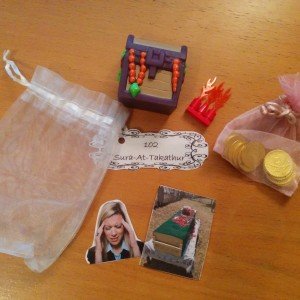 This was done by the same blogger I shared with you some time ago:https://buzzideazz.com/islamic-montessori-material-blog/

Another great product out there to remind us of our faith – and oh-so-practical given the new government policy about bags!

Here’s another one to add to the fundraising with children list… as I’m sure you’ll agree, it is very much needed at the moment. The idea is: Sleep Without A Blanket – not only will this give children a tiny glimpse into what it is like to be a child sleeping without a blanket in the winter, but also raise awareness of the struggles that other children are facing at the moment.

Here is one example of someone doing this challenge, although I know there are many out there. Do donate if you can!

“My name is Sakinah Sumar and I am 5 years old. Me, mummy and pappa will be sleeping without a blanket for one night to remember the Syrian people who have to do this every night. They are facing a really cold winter and need blankets to keep them warm and alive. Please sponsor me so that the money can be used to buy them the blankets they desperately need.”

And here are some oh-so-cute letters written by other children taking part! 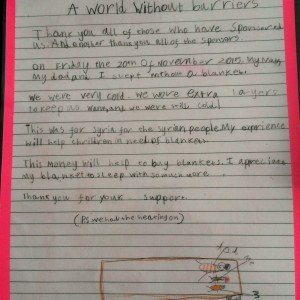 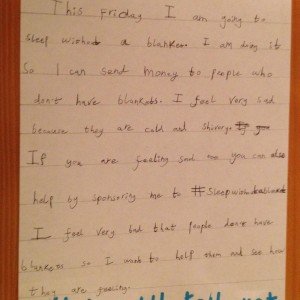 Just WOW. The lessons being learnt!

“How did you spend your eighth birthday? The day likely didn’t involve leaving winter coats out for the homeless to protect themselves against the cold weather. CBC reports Tara Smith-Atkins, a resident of Nova Scotia mobilized her daughter and young friends to do just that.

Smith-Atkins requested donations from her local community of the course of a few weeks. Then, for her daughter’s birthday, she took a party of parents and kids to Halifax where they wrapped coats around lamp poles, street signs and trees.”

Show them your roar!

A lovely message to our hijab-wearing girls during these times…

“Show them your roar!”

What an example for our children about how good things come around!

I’m sure you heard about the little boy who gave his pocket money up to help the mosque in TX that was vandalised. (If not, check it out here:https://youtu.be/agwOsODDczY)

This is what the American Muslim community did for him in return!