When I introduced Imam Hussain to my school

Subhanallah! I am in AWE!

I really feel like cutting and pasting the whole thing (!), but will settle for this excerpt ;):

“Pupils swarmed towards me to let me know how much they loved the message and story and I felt a relief. Imam Hussain’s universal message would never let me down, why did I have any doubts? During the following weeks, pupils would walk past me in the corridors and chant ‘Hussain’ whilst clenching their fists in a celebratory manner of approval; they agreed with his values. Pupils would demand I include his story in the Religious Education curriculum. Pupils saw my wristbands with Imam Hussain’s name on them and asked where they could purchase one because they wanted to wear it too. They would stand with me during break-time and ask me more questions. Remember, this is not a Muslim school. We are talking about pupils from a conservative Muslim background as well as plenty of those who aren’t Muslim at all making these comments. It goes to show that Imam Hussain’s message transcends sects and appeals to those who love justice and human values.”

I love these wrist bands for example, that remind us to ask for help through Hazrat Abbas: 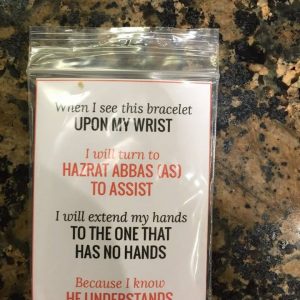 Teach your children that the tears for Imam Husayn (as) have shafa – indeed, tears have been found to have different chemical content, depending on why they are being shed. Encourage them to wipe it on their faces and body, rather than wiping it away with a tissue.

We need to put a love of the family of the Ahlul Bayt (as) into our children from a young age. If we do this, then it will help them when they’re older. Many teenagers have strayed, but through the love of Imam Husayn (as) have then come to the majalis of Muharram and returned to the right path – they started praying again, started fasting again, started wearing hijaab again, and so on…

Summarised from a seminar by Sheikh Abbas Jaffer

In the same vein: We need to put the love of Islam into our children BEFORE the law. When they are older, if they rebel against the law, it will be the love that will bring them back.

Don’t underestimate the value of maatam and the symbol of what it stands for. Teach your children it’s importance and to take part, even if they don’t understand it yet.

In Russia, when it was difficult to openly practise Islam and commemorate, Muslims developed a softer, more secret way to do maatam rather than give it up altogether. They would slip their hand in between buttons and place it on the chest and whisper, and they taught their children to do the same.

Now, they are allowed to practise more freely and so do maatam normally again, but continue to do this secret maatam every now and then as a reminder…

Summarised from a lecture by Sheikh Abbas Jaffer

We listen to lectures year in, year out – but the change in us in minimal. How can we change this so that the knowledge turns into action?

One suggestion is that we reflect on it and pull out a point of action even after the majlis. On the way home, why not start a family tradition on what each family member learned and one small thing they are going to try and change based on that?

Inshallah with little steps like that, big changes can happen 🙂

Inspired by a lecture by Sheikh Abbas Jaffer

Today’s Muharram gem comes in the form of this video. In yesterday’s lecture, Sheikh Abbas Jaffer talked about wealth, and the duties that come with it.

This video is a perfect example of someone who recognised that, and in fact uses the same words: “If you have wealth, it’s a duty to help those that don’t.”

Watch this video with your children, about the inspiring billionaire who gives 99%(!) of his wealth to developing long term solutions to world issues such as water, energy and health.