Salaah Idea 7: Model it yourself!

It sounds so obvious but unfortunately (am telling myself first!), we often forget to model the best behaviour ourselves.

Here’s what someone sent in: “Start through actions rather than words. Many of us have grown up with parents who would tell us to go pray but they would be finishing up cooking in the kitchen or cleaning, etc instead of going to pray.”

Simple things like stopping whatever we are doing at Salaat time, taking some time to recite Azan and Iqamah beforehand, and the tasbeeh and duas afterwards. If however, we are grumbling at how early Fajr salaat time is during the summer or how we have a million things to do…this will also have an effect.

My own first memories are listening to my dad recite the Fajr dua out loud after Salaat…he wouldn’t force us (in fact, we would usually be asleep on the musalla straight after finishing!), but that recitation has stuck in mind and now when i recite it, i can often hear his melody in my head

“No one recognizes hypocrisy quicker than a child. The truth of the matter is that you can encourage and teach a child to pray all you want, but if you’re not going to pray, the chances are highly likely that he/she’s not going to pray either. And letting a child witness that you pray isn’t always enough either. What about how you pray? Are you rushed and distracted? Do you drag your feet when the prayer time comes in? Are you nonchalant if you miss a prayer? I know of an adult who remembers his own father weeping when he once missed a prayer, and that reaction made more of an impression on him about the importance of prayer than all the lectures in the world ever could.”

Another benefit of praying together is that it can be a form of quality time with our children. Here is what one mum said:

“Make prayer time parent time…At a parenting workshop I attended a few years ago, the speaker shared how she offered her children two types of reward for good behavior: a tangible treat or one-on-one time with each parent. She said she was surprised when the kids always chose time with their mother or father over a trinket.

Taking this into account, spend a few minutes after each prayer with your young Muslim connecting, asking or answering questions about an issue of concern, or simply making it a time for hugs, jokes, and lighthearted hanging out.”

Another mum I spoke to says how she realised that prayer time was her opportunity to spend quality time with her dad. After jamaat namaaz the children would be allowed to go off but their dad would stay on and do his duas, etc, and basically be available for them. Looking back, she sees that all the major decisions made were done at that time, on the musalla! 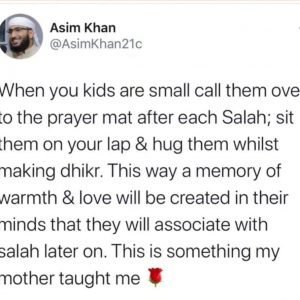 Salman al-Odah was asked, “How do you get your kids to love the salah?”

The first thing he said was, “Have them love you.”

Learn this life lesson: tarbiyah is founded upon relationship.

Tarbiyah is the raising up and education of a child such that she can reach her full potential as a human and a Muslim. It is different than ta’leem, which refers to fact-based education.

We often confuse the two, giving our children ta’leem when they need tarbiyah.

Ta’leem is teaching our children the how-to of the prayer. Memorizing the duas, learning the positions.

Tarbiyah is the cuddling after the prayer when we ask each other, “What did you ask for in sajdah?”

Ta’leem is memorizing ahadeeth and verses.

Tarbiyah is the dinner-table banter where we talk current events and other issues on our mind.

Tarbiyah is the loving conversation we have about an incident that happened at school.

Ta’leem is studying seerah by memorizing dates and events or preparing for a quiz bowl.

Tarbiyah is snuggling in bed and telling stories of brave heroes of the past.

When we were at Umrah, Ustadh Abu Eesa stressed this point a great deal and it has caused a seismic shift in my own approach to teaching my children. I had asked him if he had a suggested program of study for school-aged children. He responded by saying that he was no expert on education and he would leave that to the experienced teachers to develop such a program. He directed us instead to focus our efforts on building relationships with our children as our tarbiyah.

“Tarbiyah,” he explained, “is an emotional, not a physical exercise.”

Long after facts have come and gone, what a child will remember are the memories she has cuddling on the couch, laughing at stories, and warmly basking in the glow of a parent’s attention and love. This relationship is what builds the person up, not the facts and pieces of knowledge imparted.

This does not mean we do not teach facts and knowledge! Those who follow my work know that I do indeed spend time on this ta’leem. You need to discern the difference between the two themes of ta’leem and tarbiyah though, so that you give adequate time to each.

Most importantly, you must understand that you, dear parents, are indispensable. You CANNOT outsource tarbiyah. You can send your child to classes and masjid programs for ta’leem but this can never replace tarbiyah. The cuddling on the couch, the lively discussions around the table, the one-on-one chats before bed….these are the things that only a parent can do. And these are the things that build the foundation of the Islamic akhlaq and adab (morals and manners).

Salaah Idea 5: Pray in Jamaat as often as possible

The family that prays together, stays together! Here is what one mum had to say:

“I have never ‘taught’ my kids to pray as such, they have learned by praying together. As often as we can, we pray altogether, especially when my husband is home. I think it is important and has made a huge difference, especially when the younger children see the older ones praying.

Just one sidenote…it is probably a good idea to establish the habit of praying jamaat even before having kids, so watching the parents pray together is something they grow up observing too!

Salaah Idea 4: Designate one area of the house for Salaah

This was a great idea sent in by a mum:

“Avoid having everyone pray in their own little corner of the house, by designating one space of the home for this purpose. Make a prayer area an escape to a tranquil and peaceful place.”

Even if there isn’t enough space in the house for a prayer room, just having a common place to pray sets this up. And what’s more, it paves the way for praying in jamaat!

Alhamdulillah, theses days there are wonderful books for all these lovely topics!

One great favourite of ours when the kids were young was “I Can Pray Anywhere” by Yasmin Ibrahim…this bright and colourful book emphasizes that you can really pray anywhere, and is one the youngsters will LOVE to read again and again inshallah.

One for older children is “Time to Pray” by Maha Addasi. In this story a little girl visits her grandma in a Middle East country. During her stay, she hears the adhaan from the minaret nearby. The story weaves the the call of adhaan, actions of wudhu, salaat, times of salaat and the sweet relationship between grandma and the little girl all nicely together in a wonderful tale.

There are so many others! Here are a few other titles to explore:

Salaah Idea 2: Spread out their Prayer Mats too

A lovely idea someone once shared was to spread out the childrens’ musallas too, from a young age, and whether they joined you or not!

Even if they come and sit down on the mats for a bit while they do something else, it is getting them used to the concept. If they happen to pick up the tasbih and/or do a sajdah, then all the better
And check out these awesome child-friendly prayer mats i just found on google!

P.S. An idea was sent in on facebook to suggest making a miniature Kaaba and placing it in front of the musallas for them to pray towards, to make it all the more magical 🙂

Salaat Idea 1: Have the Azaan playing in the house

Idea 1: Have the Azaan playing in the house

I remember growing up with the sounds of the calls to prayer surrounding us 5 times a day, and it is one of the things i really miss now that I live in London!

But Alhamdulillah, there are now many resources we can use to bring this beautiful reminder for Salaat time into our houses. Islamic channels on TV, apps on phones, programs on PCs and Azaan clocks are all ways we can have this at home to make the children aware that the time for Salaat has set in.

Not only is it beautiful and a reminder, the Azaan has an awesome effect on us too!

Here is a video on the healing power of the Azaan:

Check this awesome video out with your children:

And this is another great video on how the Azaan moved a non-Muslim to tears:

And this is just a little bonus video 🙂

With so many Islamic personalities to remember, it might become a little tricky for little ones to remember who was present in Kerbala and Shaam and who wasn’t.

Here’s one way that children might be able to remember – by making a (modified) family tree and underlining those present in Kerbala and Shaam in different colours (here, red has been used for those in Kerbala, and green for those in Shaam).

Here is a version for slightly younger children from Islam from the Start:

Muharram is here…and so begins our mourning, reflection and Inshallah, change. This year we will be looking at even more ideas that we can implement to share this with our children, Inshallah!

How about this calendar from www.busymummys.co.uk?

We nearly missed a couple of very important dates last year.
So this year, we’re trying to make a conscious effort in knowing the Islamic dates as much as we know the Gregorian calendar.

We made an A2 kitchen wall calender,consisting of a pic, a calendar activity and the calendar itself, that is filled out by kids. A great way to practice number writing and counting for little ones.

The A4 calender in the picture was solely for the purpose of this post, as the A2 calender contains personal information. We use the A2 as the main family calender with appt dates, our schedule, smiley faces, sad faces, birthdays etc..

Whenever the new moon sights, we will sit down to make a new calender for the month.

A great way to show kids when birthday parties they’re invited to coincide with Islamic dates that they’ve filled in themselves and marked as happy or sad.

Muharram and Safar are sad months so we chose a grey background but have colorful ones for other months.

Pic: We chose to insert a picture of something significant we did that month e.g for Muharram last year we made Alams, for Mahe Rajab we made tasbihs for Amaal of Rajab so we put a pic of that, etc

Activity: Together with a pic, it’s great when kids learn something about the personality of Masum born/died in that month.”